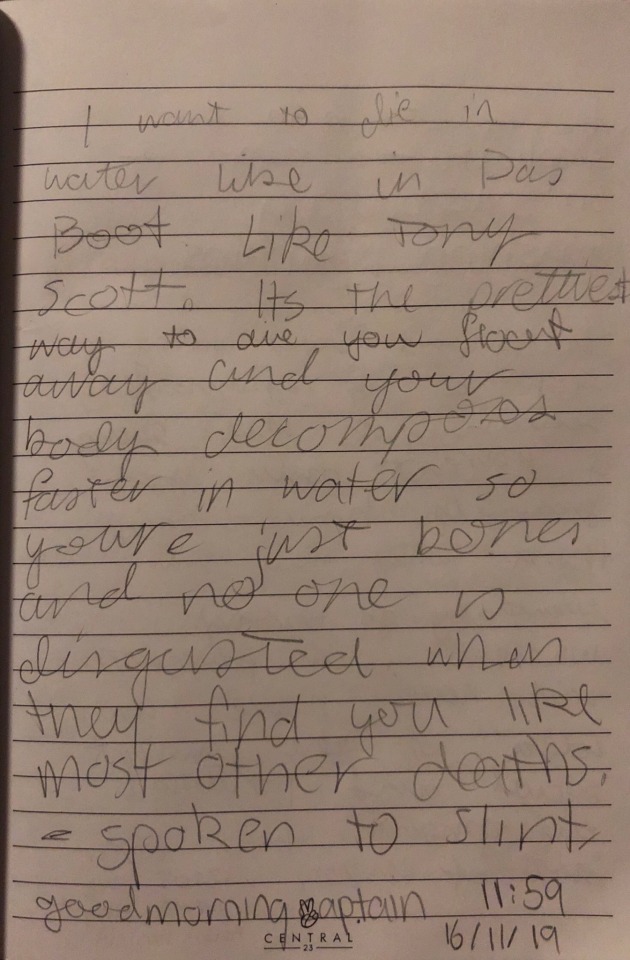 I want to die in water like in Das Boot. Like Tony Scott. It's the prettiest way to due, you float away and your body decomposes faster in water so you're just bones and no one is disgusted when they find you like most other deaths. - spoken to slint, good morning, captain. 11:59, 16/11/19. 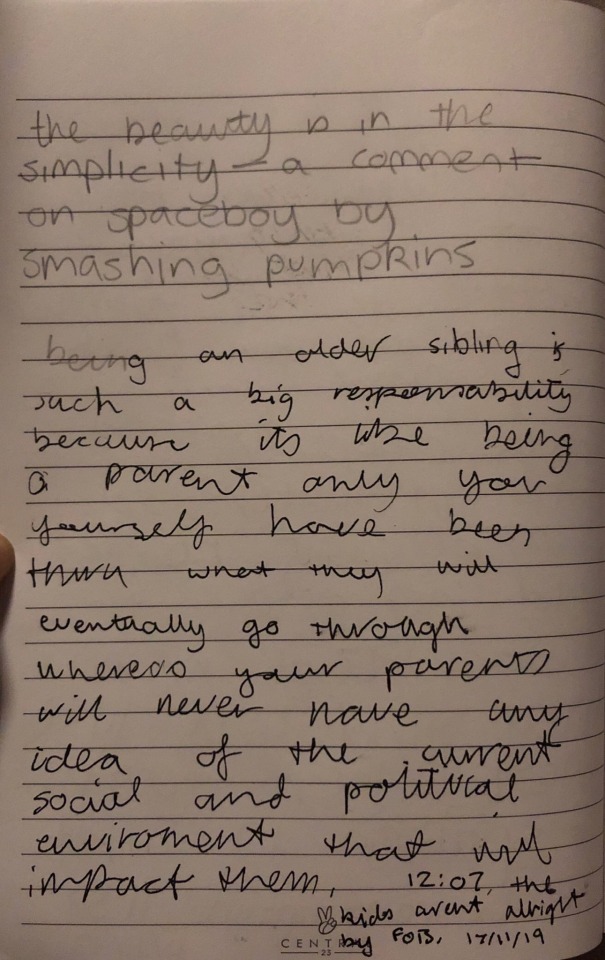 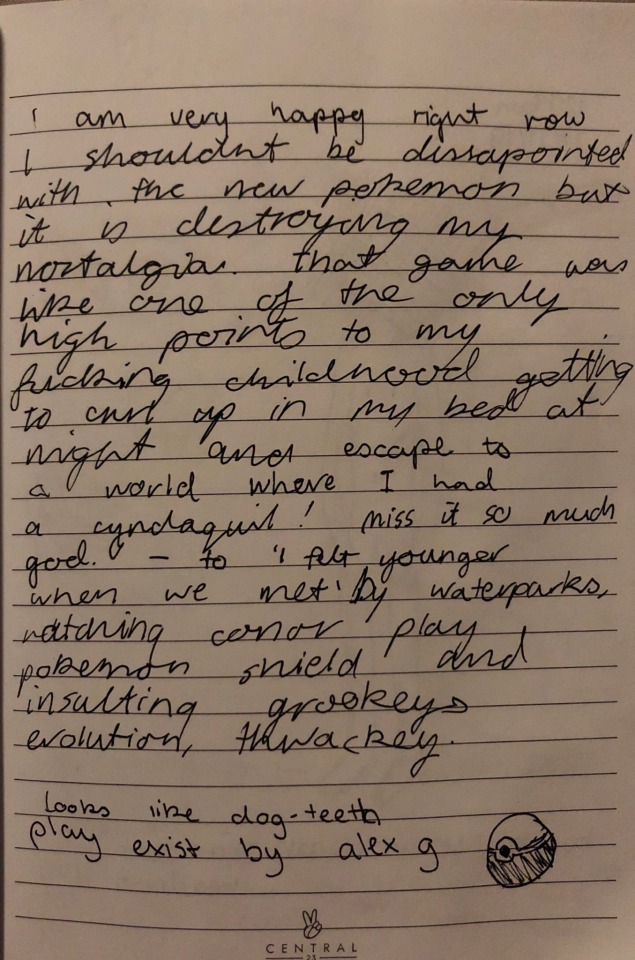 the beauty is in the simplicity - a comment on spaceboy by the smashing pumpkins.
being an older sibling is such a big responsability because it's like being a parent only you yourself have been thru what they will eventually go through whereas your parents will never have any idea of the current social and political enviroment that will impact them, 12:07, the kids aren't alright by FOB, 17/11/19.
I am very happy right now. I shouldn't be dissapointed with the new pokemon but it is destroying my nostalgia. that game was like one of the only high points to my fucking childhood getting to curl up in my bed at night and escape to a world where I had a cyndaquil! miss it so much god. - to i felt younger when we met by waterparks, watching conor play pokemon shield and insulting grookey's evolution, thwackey.
Looks like dog-teeth.
play exist by alex g. 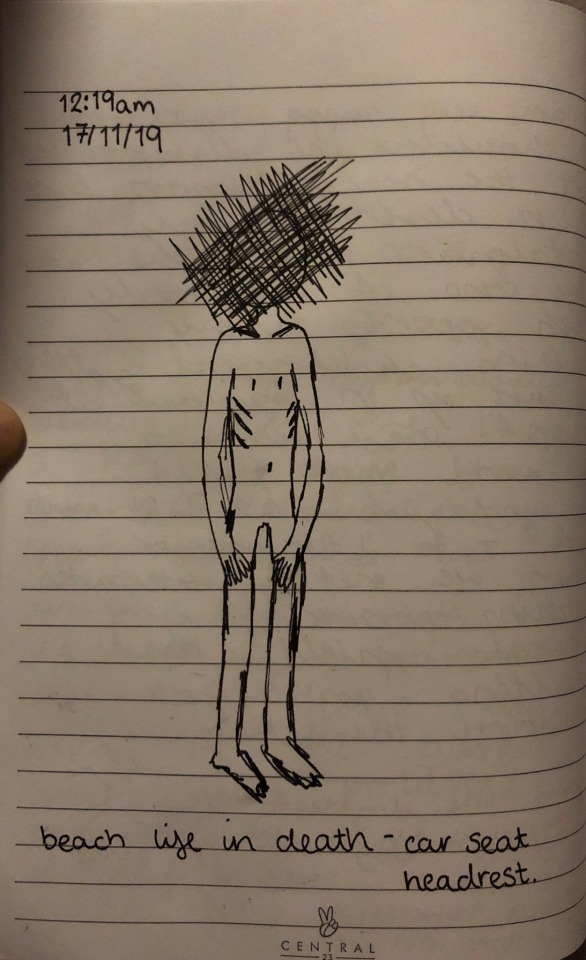 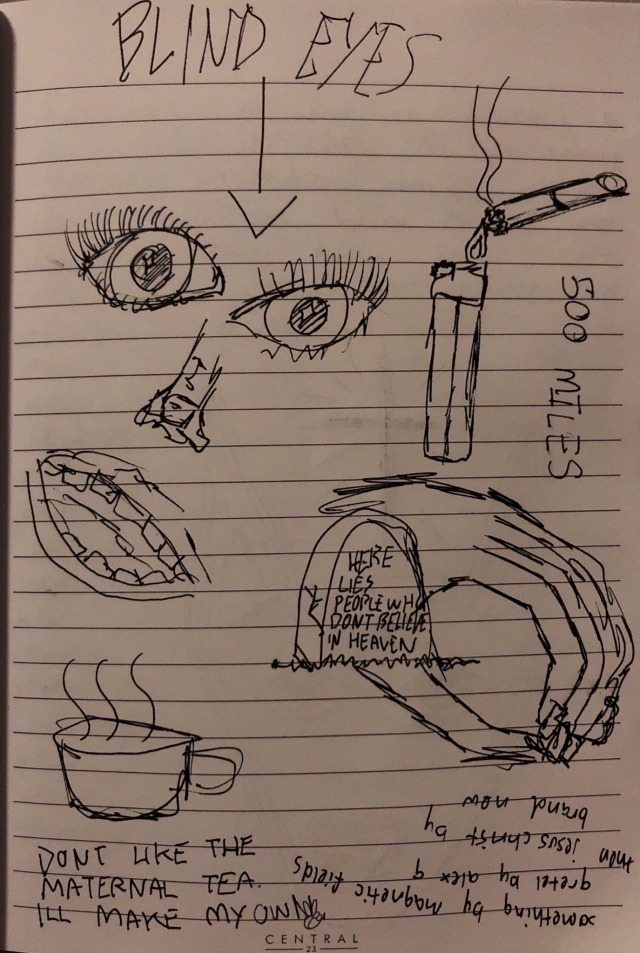 12:19am
17/11/19
beach life-in-death - car seat headrest.
here lies people who don't believe in heaven
DONT LIKE THE MATERNAL TEA. ILL MAKE MY OWN.
something by magnetic fields. gretel by alex g. then jesus christ by brand new. 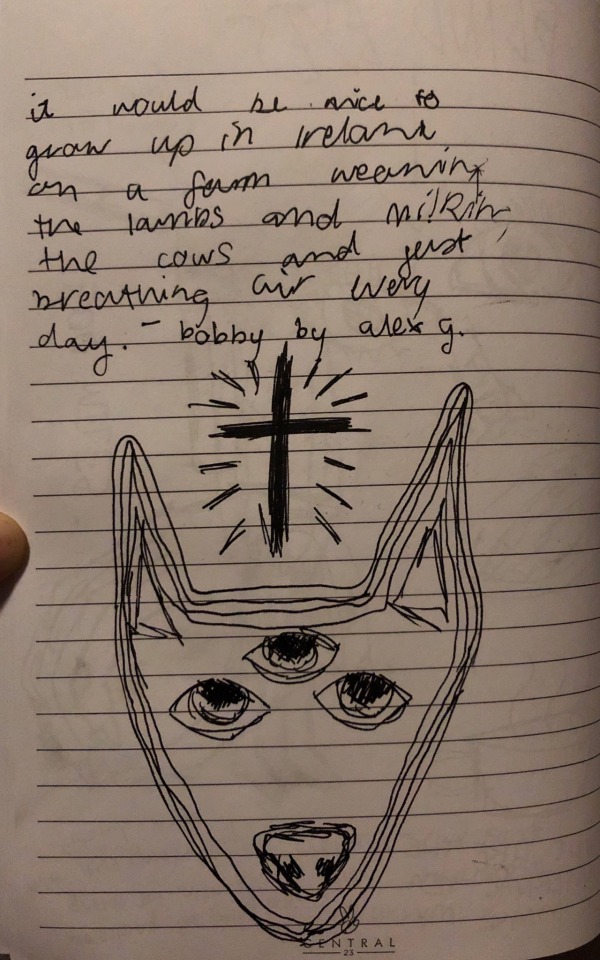 it would be nice to grow up in Ireland on a farm weaning the lambs and milking the cows and just breathing air every day. - bobby by alex g. 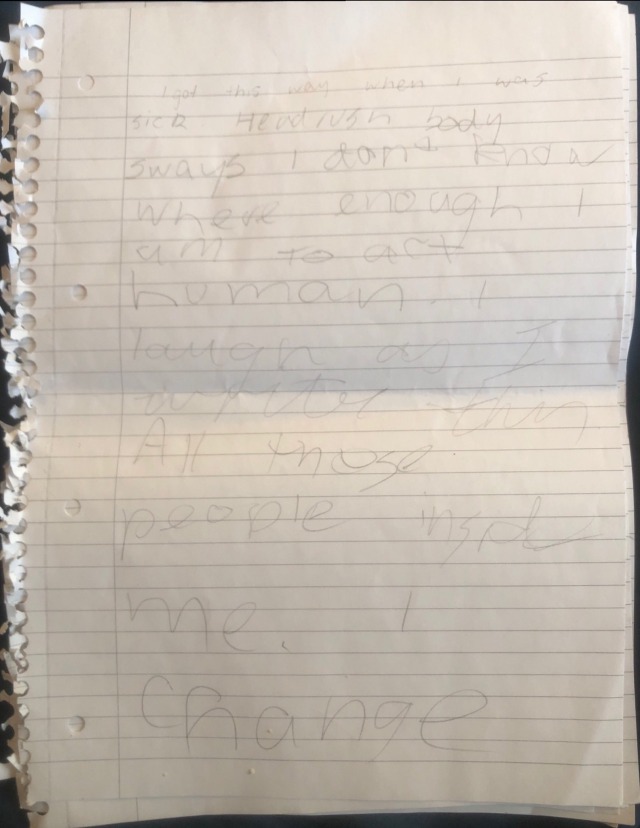 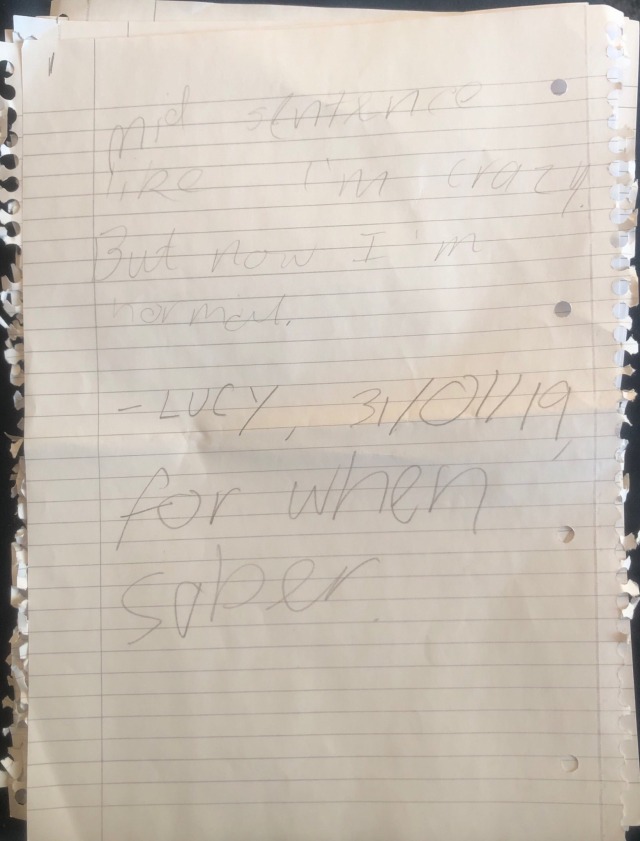 I got this way when I was sick. Head rush body sways I don't know where enough I am to act human. I laugh as I write this. All these people inside me. I change mid sentence like I'm crazy. But now I'm normal. - Lucy, 31/01/19, for when sober. 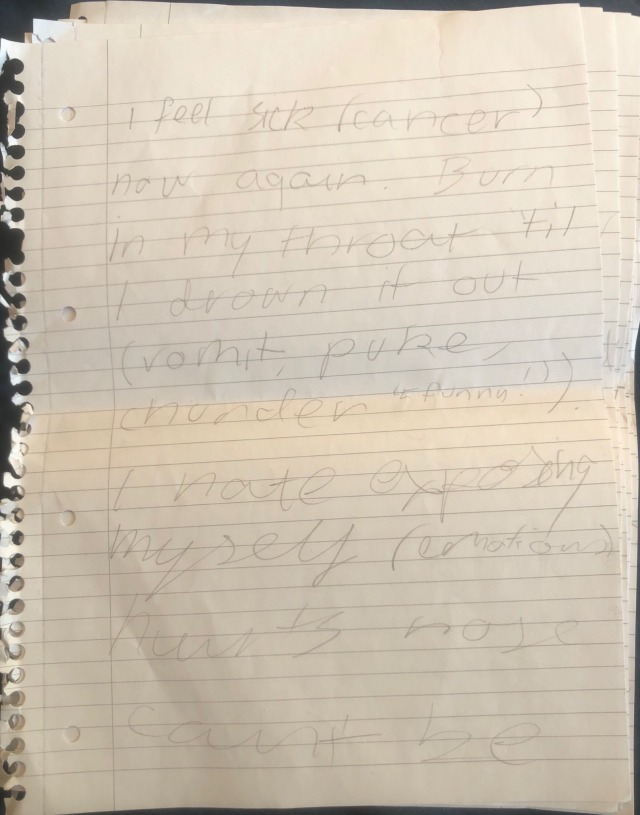 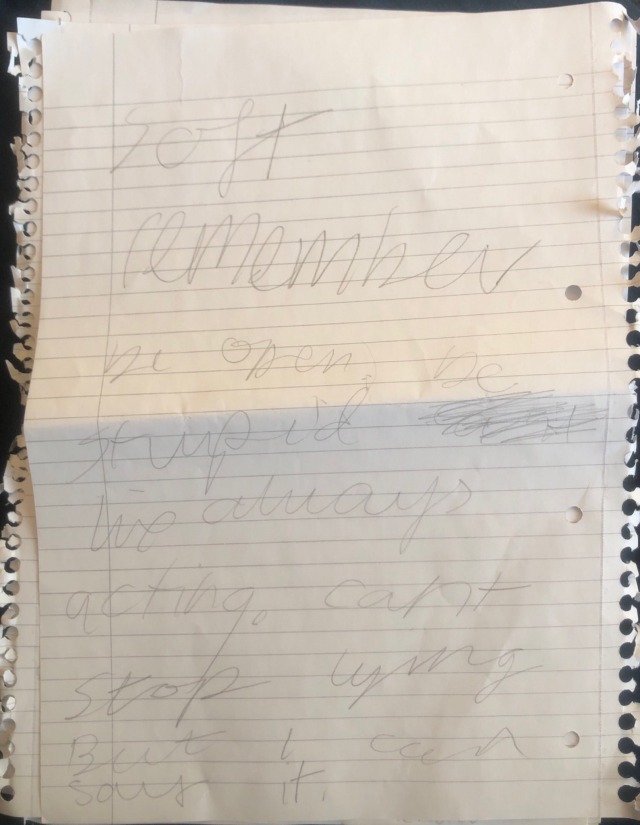 I feel sick (cancer) now again. Burn in my throat 'til I drown it out (vomit, puke, chunder (<- funny!)). I hate exposing myself (emotions) hurts nose can't be soft. Remember be open. Be stupid. Lie. Always acting. Can't stop lying. But I can say it. 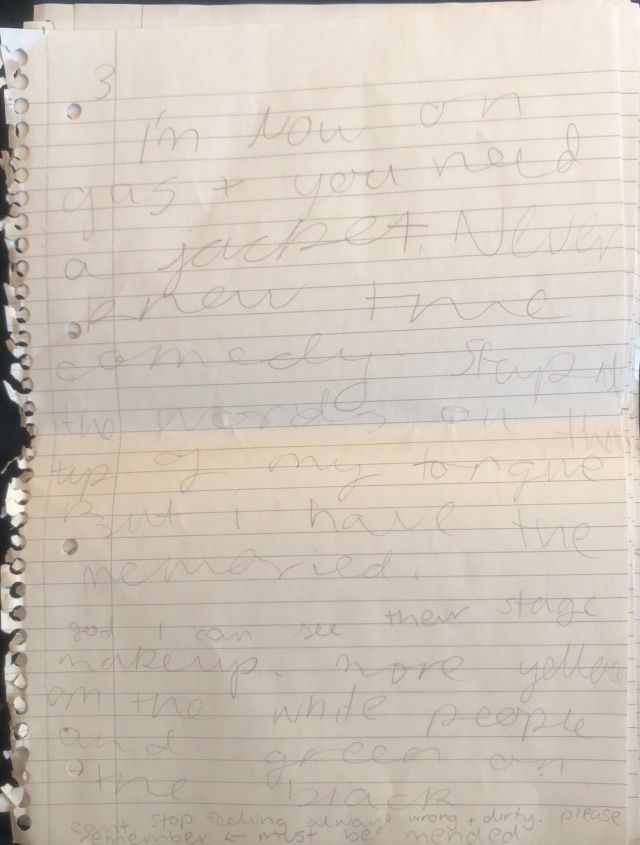 I'm low on gas + you need a jacket. Never knew the comedy. Stupid the words on the tip of my tongue. But I have the memories. God I can see their stage makeup, more yellow on the white people and green on the black. Can't stop feeling always wrong + dirty. Please remember. <- must be mended. 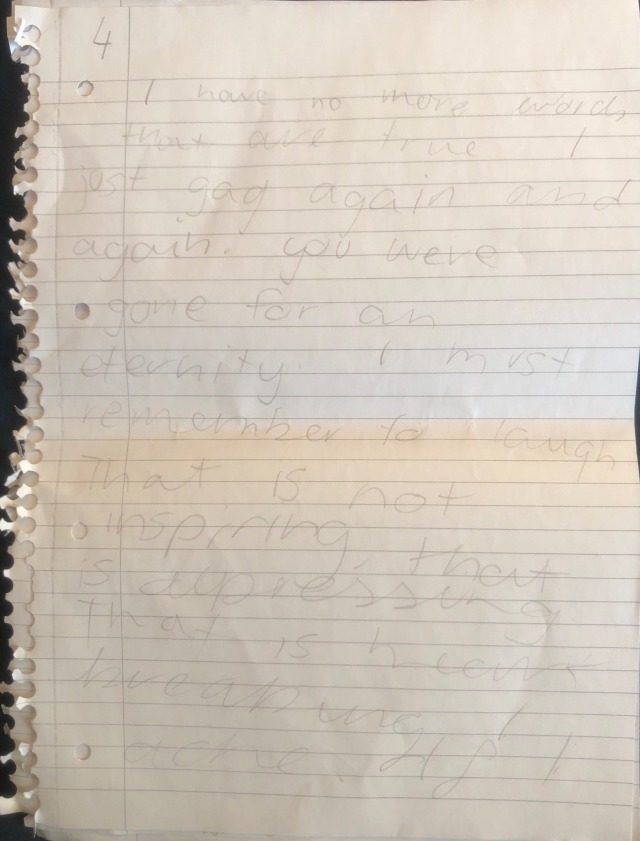 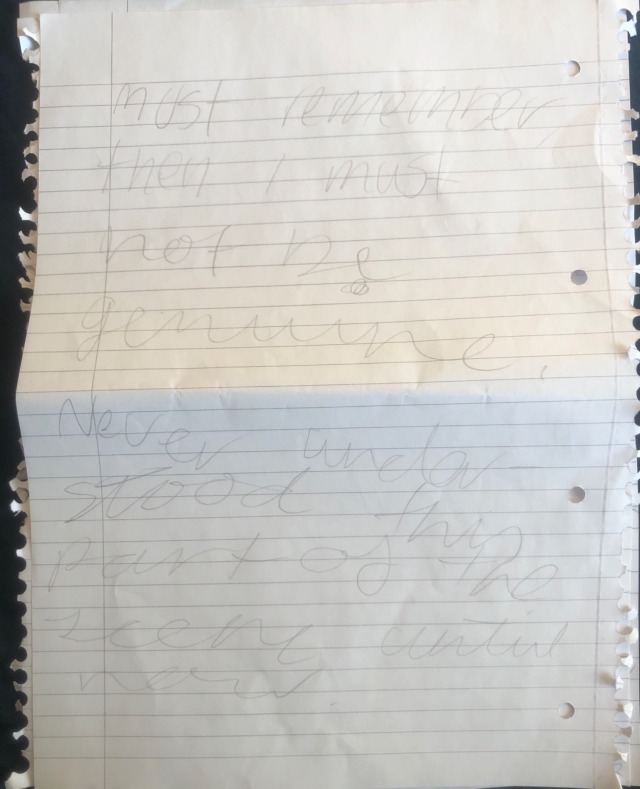 I have no more words that are true. I just gag again and again. You were gone for an eternity. I must remember to laugh. That is not inspiring. That is depressing. That is heart breaking. I ache. If I must remember, then I must not be genuine. Never understood this part of the scene until now. 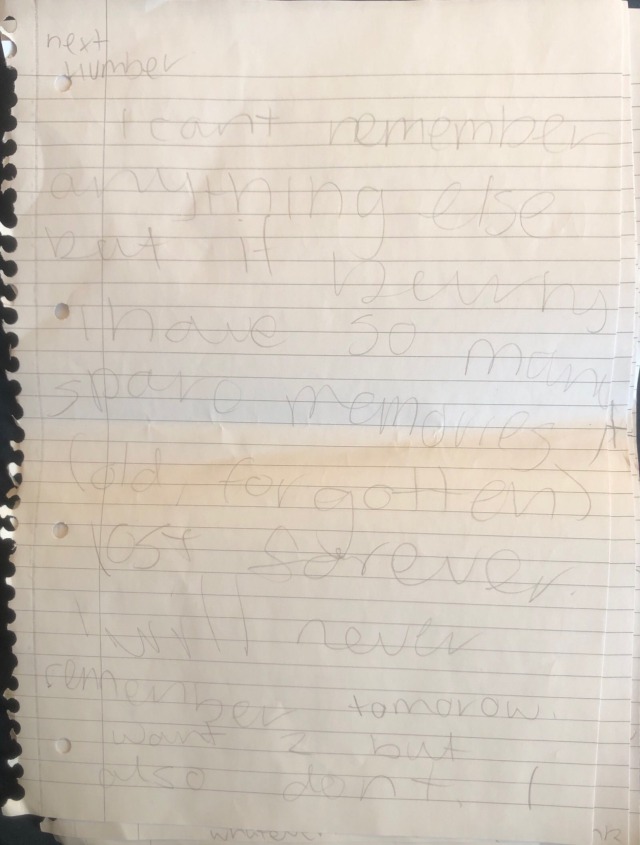 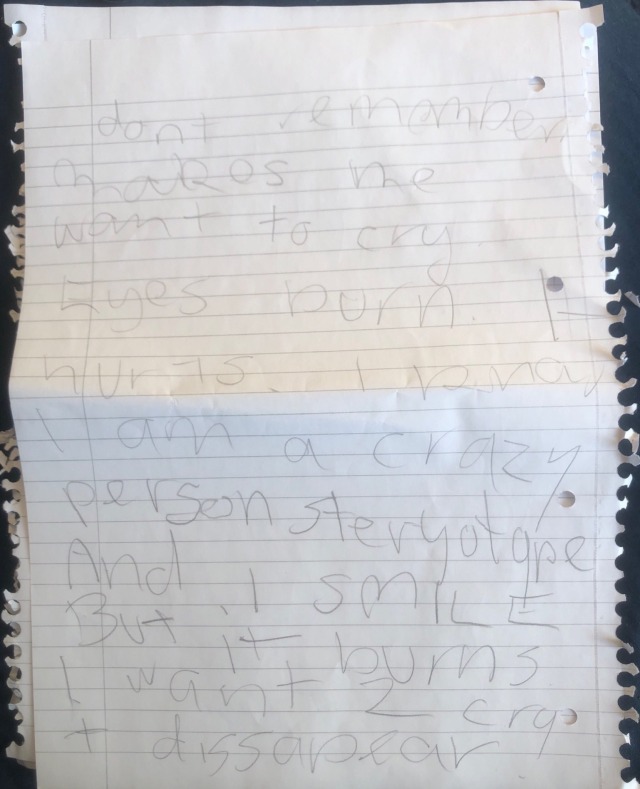 I can't remember anything else but it burns. I have so many spare memories (old, forgotten, lost forever.) I will never remember tomorrow. Want 2 but also don't. I don't remember, makes me want to cry. Eyes burn. It hurts. I know I am a crazy person stereotype And I SMILE But it burns. I want 2 cry + dissapear. 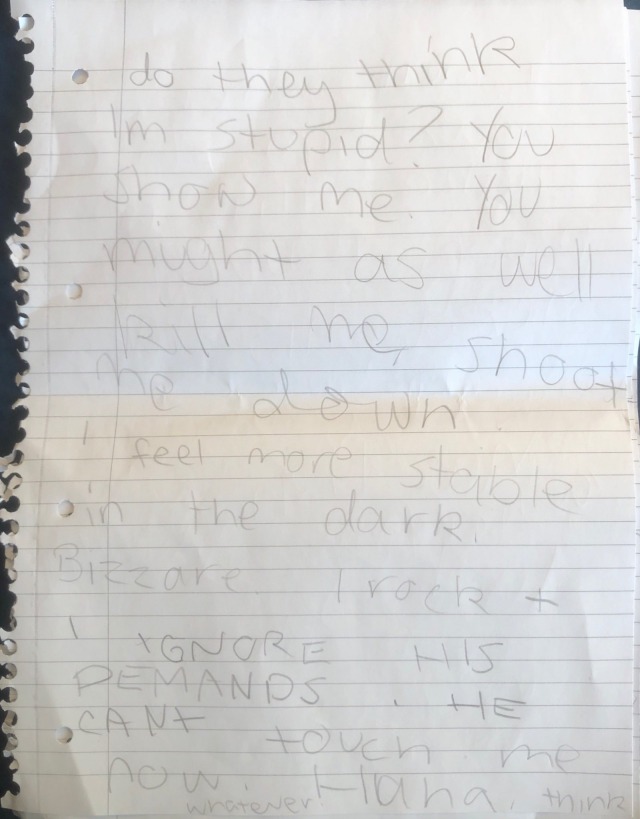 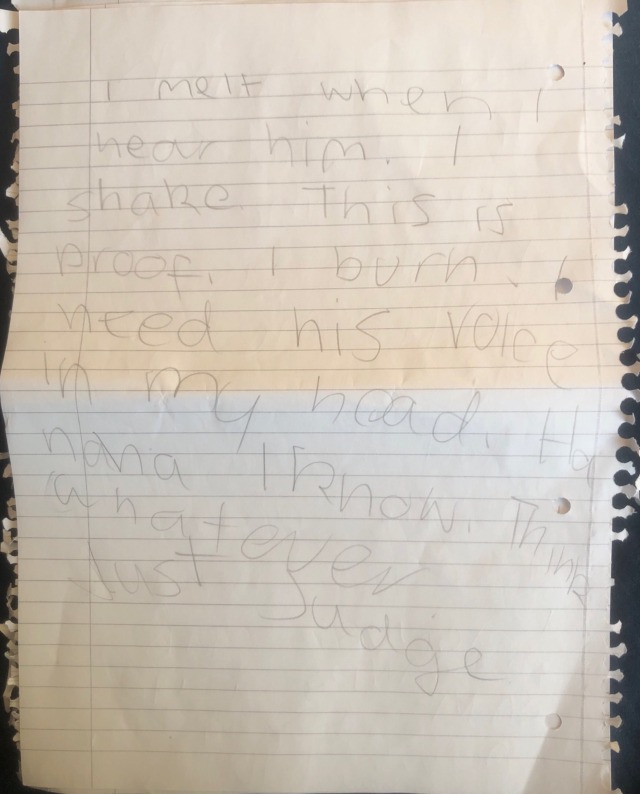 Do they think I'm stupid? You show me. You might as well kill me, shoot me down. I feel more stable in the dark. Bizzare. I rock + I IGNORE HIS DEMANDS. HE CANt touch me now. Haha, think whatever. I melt when I hear him. I shake. This is proof. I burn. I need his voice in my head. Hahaha. I know. Think whatever. Just judge. 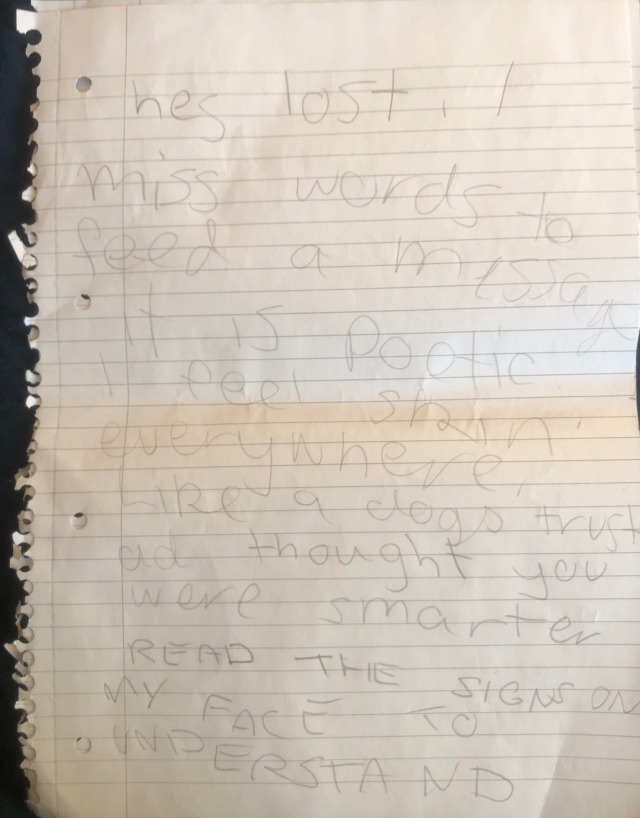 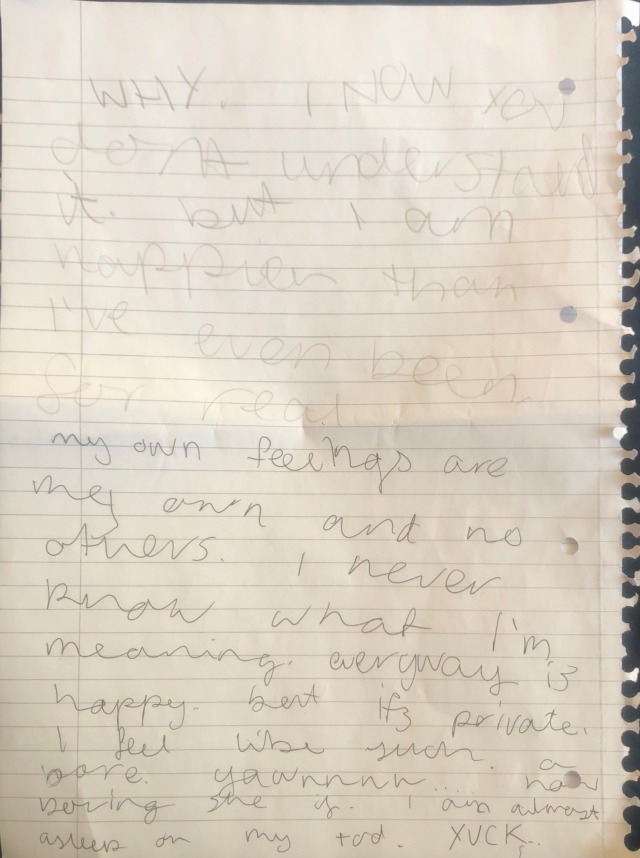 He's lost. I miss words to feed a message. It is poetic. I feel skin everywhere. Like a Dogs Trust ad. Thought you were smarter. READ THE SIGNS ON MY FACE TO UNDERSTAND. WHY. I NOW YOU don't understand it. But I am happier than I've ever been, for real. My own feelings are my own and no others. I never know what I'm meaning. everyway is happy. but it's private. I feel like such a bore. yawnnnn.... how boring she is. I am almost asleep on my tod. YUCK. 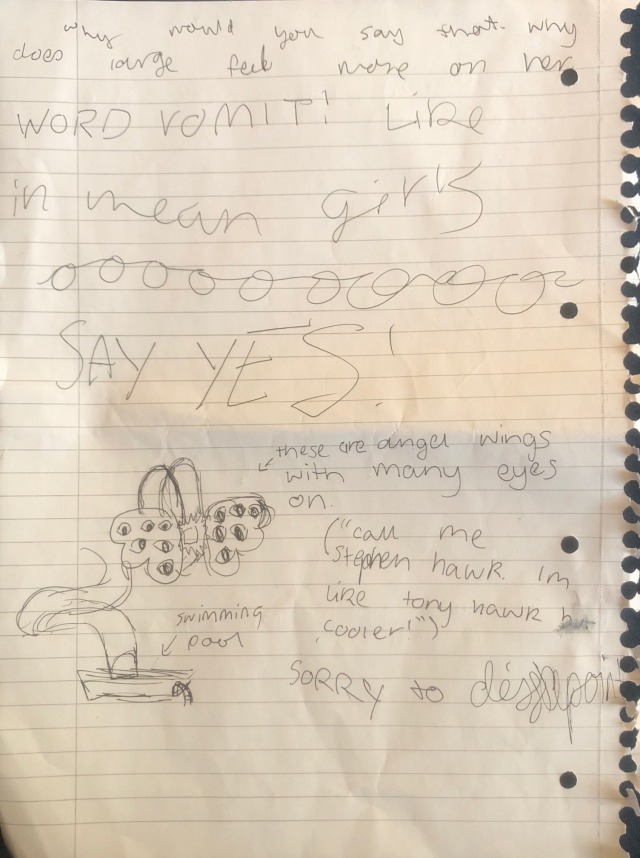 I thought they were the same. that's not as dark as it sounds in someone elses head. [just dumb shit] it's not about me. disregard the above. it's an almost joke. SHES LUMP, SHES LUMP, SHES LUMP, she's in my head - presidents of the united states of america. she's just a clone. Just a joke. his prescence is noticable. His gaze over me. the dark one. SNIFFING COKE OFF THE COUNTER in my room. why would you say that. why does large feel more on her. WORD VOMIT! Like in mean girls ooooooooo SAY YES!. [drawing] <- these are angel wings with many eyes on. [another drawing] <- swimming pool. sorry to dissapoint.